Difference between revisions of "License/En"

From TuxFamilyFAQ
Jump to navigationJump to search

To host your project on TuxFamily, a free license is required. You can choose between:

We do accept other open licenses, feel free to join our irc channel if you have questions about a specific license.

In any case, you have to choose the license at the very beginning of your project! It is quite hard to change a license once your project is started, because you have to make sure that each contributor agrees with the new license chosen.

You can look at these links for information about the GNU GPL license:

Why a free license?

Some reasons to choose a free (as in speech) license (this list is non-exhaustive!) 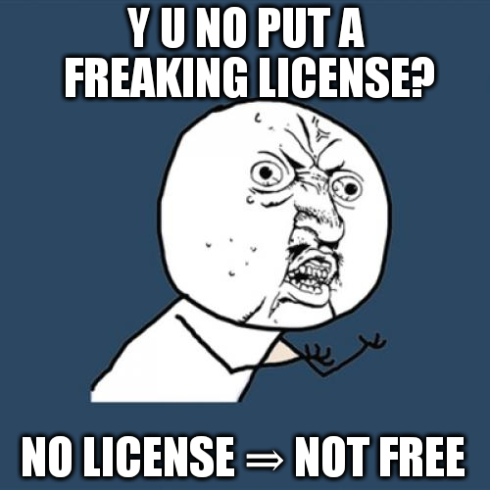 An example of a non-free license: Creative Commons Non-commercial / non-derivative (either one, or combined) Let's use the example of a film by a organization licensed under the CC BY-NC-ND license. They might have licensed it under the NC-ND combinations because they were worried that they wouldn't be able to say anything about the use of their film. However, this is not true.

As such, if you put a film, for example, under the NC license, other people won't be able to:

Those are only examples to show that NC is detrimental to the diffusion of your production, which is then marginalized because of your choice of NC. Without NC, you potentially have access to a wider distribution, without having to do anything. The main problem with NC is that it prevents uses that you would have found legitimate, wouldn't you?

ND, by default prevents the following:

IMHO, removing NC and ND does not mean you lose the ability to control the usage of your production: you should check with a lawyer to identify how to use patrimonial / moral and image rights and how they can be used as a counterpart to a CC-by-sa license.

License of this document

You can add examples to this document and use this text under the quadruple license, at your choice :